I thought Chairo II was kind of a letdown to be honest. Especially after all the waiting. I had it ranked as:

1. Atlantis/Caifan
2. 8 man opener (ridiculous trainwreck in the best way possible)
3. Navarro/Terry vs Traumas (too long)
4. Trios (fun)
5. Virus/Navarro (they didn't really... do... anything...)
6. Dalys/Keira (Dalys big time exposed as protected in CMLL style)
7. Casas/Cerebro (no idea why this only went 5 mins but a total bummer)

Chairo III on the otherhand has been a total blast so far. I've only seen 3 matches out of 8 but everything tops anything from Chairo II with both Horus/Lee & the 8 man being MOTYC's in very different ways.
"Whoa is me" - BuzzSawyer
Top

Yeah Casas and Cerebro going 5 minutes was super disappointing. I enjoyed the show as a whole though. The 8 man tag was fucking wild.
Top

- Really enjoyed Xtreme Tiger vs Dragon Lee. May be the high man, but I think it was only a little bit below the Lee/Horus match from Lucha Memes.

- Super Crazy vs Felino was actually very solid. Doesn't over stay it's welcome and seeing Crazy take these ridiculous bumps in 2016 will never not pop me.

- Casas/Blue Panther vs Solar/Terry...bleh. Didn't like this at all. Just nothing I thought was good here.
Top

Nice that Mas Lucha is uploading these matches.

Are we gonna consider ELITE an Indy until they actually debut on TV? They have more TV attractions than DTU, IWRG and the Leyendas shows where the old guys wrestle.
Top

Elite's TV deal is bigger and probably better than all CMLL programs combined. So yeah, not an indie anymore in that sense, but it's hard to call yourself a proper promotion when your entire roster is 50% CMLL guys and 50% indie guys.
Top

Good match with an insane spot in the middle.

Any idea if Hechicero/Cerebro will be found in full, anywhere? I usually mesh together the Estrellas del Ring and RUDO VISION recordings to get a full match but neither have the start. Slightly annoying, because it's a pairing I'd love to see.
Top

Haven't seen it in full yet. Don't know if Black Terry Jr shot that match either.
Top

Is it me or UG having a good year?
Top

Yeah I have started to notice that too. He just seems to have so much fun wrestling right now. Maybe losing his mask has lifted some pressure from him and now he just goes out there with a more relaxed athmosphere.

As for other Mexico Indie stuff I am waiting for that Hechicero/Casas match to surface online as that has been said to be excellent, which given the guys involved isn't much of a surprise.
It's a dilapidated boat! - Matt Hardy 2016
Top

van Fair wrote:Yeah I have started to notice that too. He just seems to have so much fun wrestling right now. Maybe losing his mask has lifted some pressure from him and now he just goes out there with a more relaxed athmosphere.

Último Guerrero used to be notorious for having a bingo card of moves to run through, and he's been doing a lot less of that. I don't know what caused that; maybe getting to do more indie matches in different environments and different opponents had something to do with it.

I had completely forgotten that this was coming up until it was announced, but CaraLucha's second anniversary is May 21. They've announced Máscara Dorada and Flamita already for the show. When CaraLucha announces luchadors separately but not matches in advance of the full card, they're usually not fooling around and those are the main-event guys. So... yeah, full card coming next week, but I would be very surprised if Máscara Dorada and Flamita aren't both part of the main event. There *might* be other guys in it too, but I'm guessing singles match.
Top 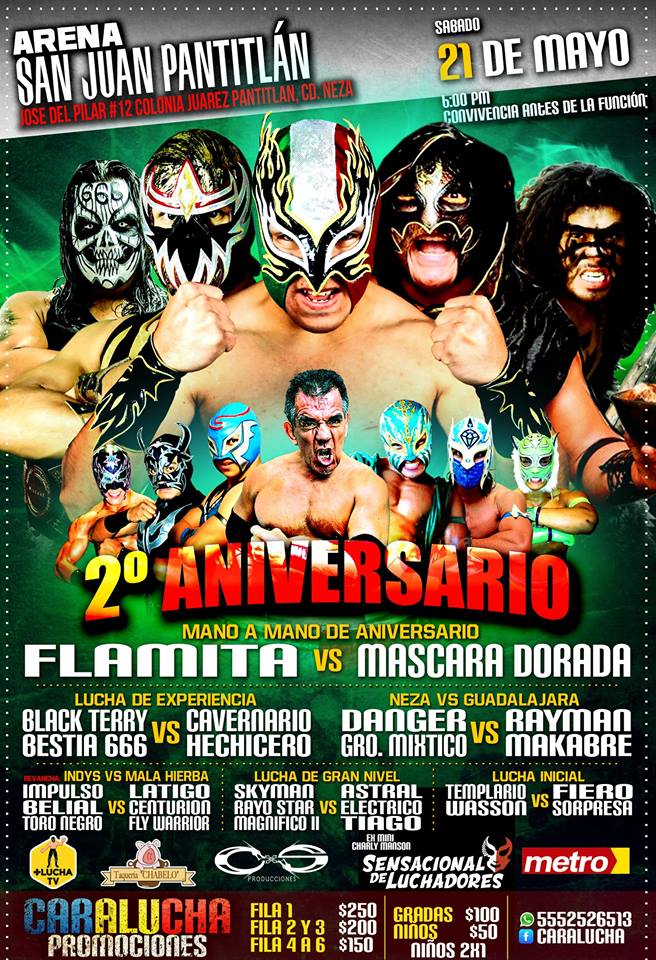 For some reason that Terry/Caveman tag has my juices flowing better than Flamita/Dorada. :p I hope Flamita vs. Cavernario happens some time this year, it'd be god-tier.
Top

That should be a great match too. Not too familiar with Fiero (and the sorpresa) in the first match, but the rest of the card looks pretty strong top to bottom.
Top
Post Reply
125 posts