1. Prior to being known as CMLL, what acronym was the company known by?

2. Who teamed with the Motor City Machine Guns against Los Guerreros Negro at the 2008 Anniversary show?

3. CMLL owns its own venue in which it runs many of their main shows within. What is it called?

5. What year was the first FantasticaMania, CMLL’s joint shows with NJPW?

6. Which CMLL star’s mask is this? 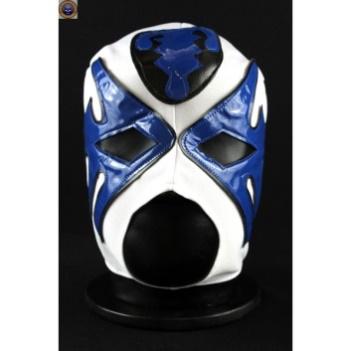 7. Leyenda de Plata is a near annual tournament ran by CMLL. Which of these four hasn’t won the tournament? Volador Jr./Rush/El Felino/Scorpio Jr.

8. En Busca de un Idolo is a relatively new tournament for rookies of the promotion. Who won the inaugural tournament in 2012?

9. Who was the founder of CMLL?

11. Who were the original three members of famous CMLL trio Los Infernales?

12. Name either of the participants of the 1991 Jucio Finale main event.

14. In 533 days as CMLL World Heavyweight Champion, Dos Caras Jr. defended the title on how many occasions? If nobody gets it right then closest wins.

15. CMLL is the oldest surviving professional wrestling company in the world. What year was it founded?

16. What was famous CMLL luchador El Santo’s cause of death?

17. What does CMLL call their Friday shows?

19. What is the better known name of current CMLL wrestler who once went under the title El Hijo del Pirata Morgan?

20. Which wrestler has had the most reigns with the belt currently known as the CMLL World Lightweight Championship?


CMLL Luchador Atlantis has taken the masks of an astounding sixteen opponents. List them.
Top

9. Salvador Lutteroth (I was very liberal with spelling)

13. ERROR on question. Everybody participating got the mark.

17. Super Viernes (again, I was very liberal here, I gave half a mark for Super Friday iirc)

Poor turnout, hopefully because y'all don't follow Lucha and a bunch of you went "fuck it, I'll just start next round"
Top

A no show by a whole division? Is there some sort of boycott I'm not aware of?


Here's the results of the vote:

"Name that Wrestler" will be added to the Wheel of Categories replacing whichever category is selected for this coming round out of the following:

If ever there was a topic I need a victory by forfeit on it was this! I'll take it!!
Top

Pretty stocked to get 7 points. Way above expectations. I feel like i got a couple of crazy guesses correct.

Then again, i basically answered Ultimo Guerrero to every single question, so i was bound to hit at least a couple of times.
Stablewars Fantasy Wrestling Games
Top

how in the white-hot hell did i manage to get 14 points? the spirit of el santo must have been watching over me.
Top

Ten points for finishing 3rd in your league, and a further four for winning your head to head.
Top
Post Reply
26 posts

Return to “Well You Know Something, Brother?”